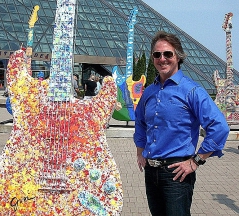 Made in the C L E

Joe, with his guitar design at The Rock-n-Roll Hall of Fame & Museum "Heat Miser & His Brother Snow", colorfully expressing the extremes of any given Cleveland year.

Borsuk was the first selected from over 300 proposals to design and paint a 10-foot tall guitar for the Rock Hall's GuitarMania, a year-long program including national artists directed by The United Way and Key Bank. Guitars were displayed throughout the city and were auctioned off for charity at the Rock Hall Museum. “Heat Miser & His Brother Snow” sold for a premium to a private collector outside of Ohio. A miniture is for sale in Cleveland Hopkins Airport and many other national locations.

Joe has lived design, art and business his entire life.

He studied at Cleveland State University and was active in erecting campus sculptures with CSU's art professors, was active in the campus newspaper, student government, competitive sports, and was a lifeguard at CSU's national record-setting Olympic pool.

After graduating Dean's List from CSU with degrees in Fine Art and in Psychology, Joe was personally selected as a designer and marketing professional to work with Rockwell Automation and then Philips Medical – two leading billion dollar, multi-national corporations in northern Ohio. Next, he was tapped from more than 350 candidates to help Cleveland State grow its marketing and college enrollment where he worked on establishing graphic standards, recruitment and advertising. Joe additionally studies at the Cleveland Institute Art to hone art, design and technology skills.

After working with some of the area's most gifted professionals for more than a decade, Joe established Borsuk Design to work with a diverse clientele from promoting Cleveland tourism to healthcare to spearheading start-up companies. He now serves top area businesses in northern Ohio.

Borsuk grew up as the youngest of 9 in a family of artists, engineers, teachers, health professionals and business owners.

Joe is currently serves on Cleveland State University's Alumni Board of Directors and volunteers as a mentor for college students. He enjoys design, art, architecture, golf, world travel, photography, the 3 Stooges and motorcycle riding. Borsuk additionally volunteers in community charities including Alzheimer's Association and Chaplain Partnership of Cleveland.

At age 15 he was a U.S. Airforce Academy nominee. Joe lettered in high school wrestling and competed for 5 years. He is a former martial arts instructor, competitor and trophy winner, specializing in Tae Kwon Do. Joe comes from an amazing family of 11, has a wonderful daughter and resides in Parma, a suburb of Cleveland Ohio.

Connect with Joe on LinkedIn!

Connect with Joe on LinkedIn!